Vanitas involved the transformation of a small windowless rooms into a tableau vivant.  The project is by 17th century vanitas paintings.  The inclusion of modern elements is also a nod to the still life paintings of Photorealist Audrey Flack.

The environment was very dimly lit and viewed from a door, blocked by velvet ropes.  The inaccessible nature of the installation not only underscored the concept of a tableau vivant within the larger event space, it was meant to deliberately frustrate the subject who would want to view the environment/arrangements more closely.  The inclusion of two chairs separated by the table featuring fruits and interesting objects, infers an impasse between two implied but absent figures. 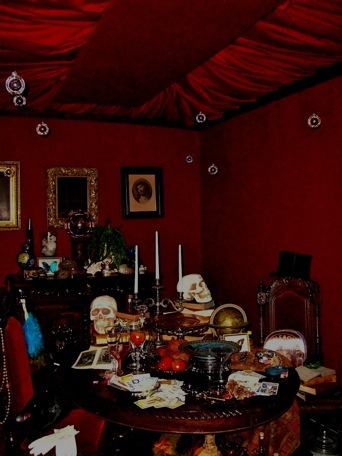